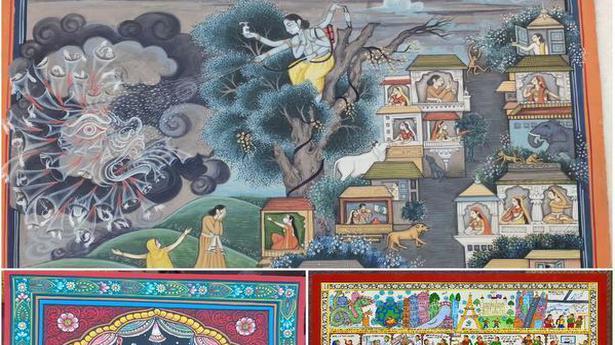 Lord Krishna has begun wearing masks and carrying sanitisers — on canvas. Another painting has churches, temples and mosques banding together to fight the virus. If this doesn’t make Indians take Covid-19 seriously, nothing will!

Even as makers of fine art internalise and reflect upon Covid-19 (only a few such as Dhruvi Acharya are creating right now), folk artists are getting out their pigments and responding to the times — interpreting the pandemic according to their culture and tradition. So in Orissa, pattachitra scrolls show beautifully-dressed women in masks washing their hands; in Maharashtra, healthcare workers vanquish coronavirus-breathing warli dragons; and in Rajasthan, phad paintings help explain social distancing to local villagers. The mythological themes have disappeared, at least for the moment.

“Many crafts practitioners have had [traditional] design-driven outputs, but now these lines are blurring in response to the international crisis,” says Sharan Apparao, curator-founder of Apparao Galleries. Even a couple of decades ago, this may not have been possible. But the concerted efforts of organisations like Dastkar and Dastkari Haat Samiti — NGOs that work with crafts people and offer them marketing platforms — and their exposure to other cultures (many artisans travel abroad, representing India) have made a difference. “Folk artists have got used to urban market requests and, over the years, we’ve encouraged them to look beyond the Ramayan and Mahabharat to more contemporary subjects. So now [besides their traditional work] they also work according to the times,” says Jaya Jaitly, founder-president of Dastkari Haat Samiti. The timing couldn’t be better. When the handicraft industry is reeling, Covid-themed work is slowly popping up on collectors’ radars. One of warli artist Anil Vangad’s pieces just sold for ₹80,000 to a customer in Chandigargh.

Art has been created throughout history to reflect good times as well as bad. Think the bubonic plague, which claimed over 200 million lives in the 14th century. Works such as Giacomo Borlone de Burchis’ The Dance of Death and Renaissance master Pieter Bruegel the Elder’s Triumph of Death were key in recording the dark days. “Taken in conjunction with other historical documentation, [such works] serve as a visual record of a particular point of view, in the same way that literature, music and theatre reveal the human condition during trying times,” explains Jagdip Jagpal, Fair Director, India Art Fair.

But can folk art be considered of equal importance as fine art? “I think the labels ‘fine art’ and ‘folk art’ sustain a class system. Both are dynamic storytellers. The imagery, world views and techniques may differ, but their art is a representation of their creative talent,” she says.

And the talent is plenty, traversing everything from madhubani and miniature painting to cheriyal scrolls and kangda art. As the ‘season’ approaches — retail for craft picks up mid-August and peaks during Diwali — these contemporary works could be a game-changer for many artists. The artist from Raghurajpur enjoys pushing the boundaries of his traditional craft — think a series of fibreglass tigers he decorated with pattachitra art (writer-columnist Tavleen Singh ordered 14 of them). But the last couple of months have been tough, with no commissions to work on during the lockdown. The everyday, however, inspired him to create a “life as it is now” tableau on handmade paper. “Everyone is at home, so I looked at what they did all day long,” he says. The delightful pastel-hued works, with the occasional monochrome painting — using a mix of acrylic and natural colours — cover the entire gamut, from “women sending their husbands to the market armed with bags and sanitisers, and helping children wash their hands, to farmers working with masks on”. And the appreciation is rolling in. The Odisha Post recently printed the artwork on envelopes to spread the message of using ‘masks as a way of life’. From ₹1,000 onwards. 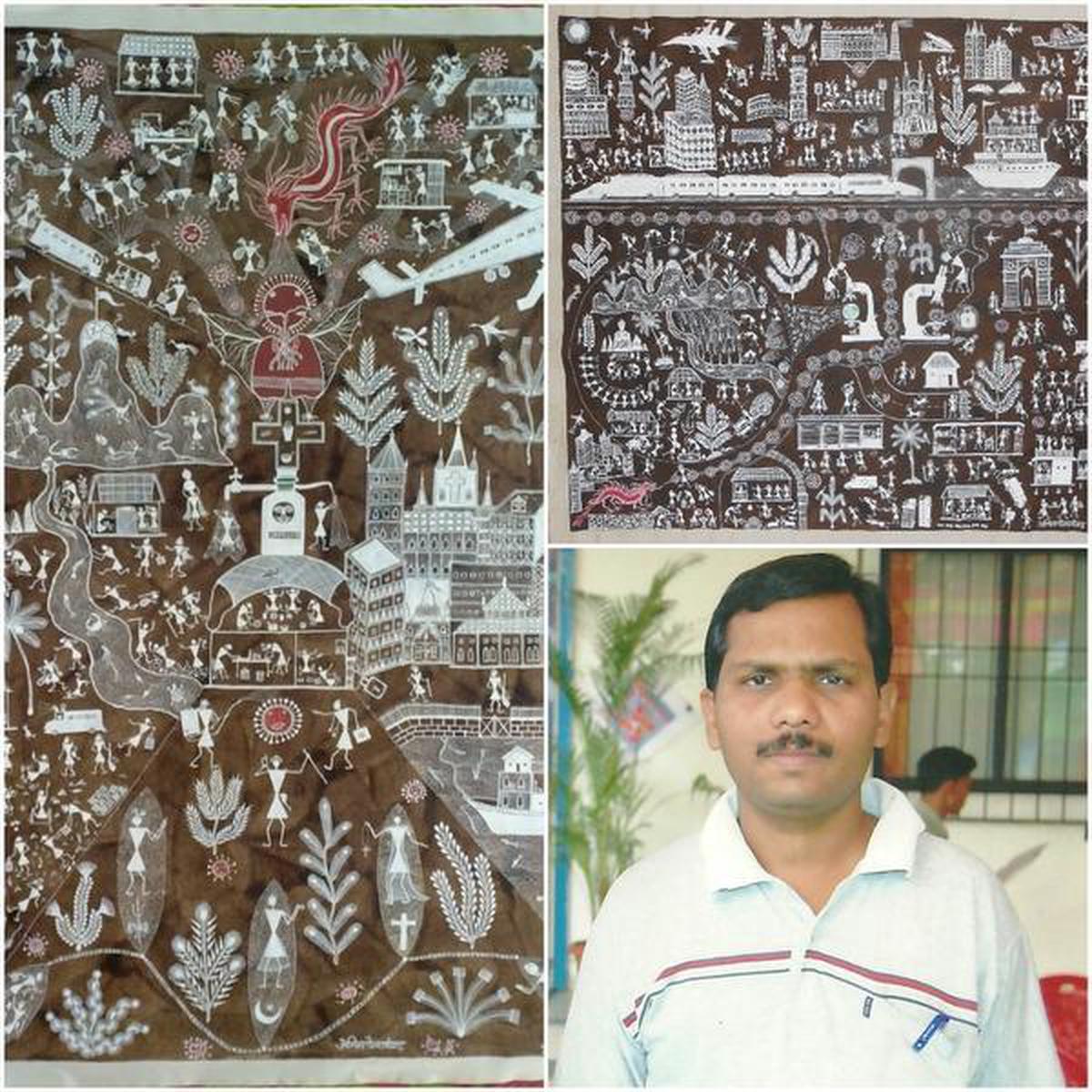 These graphic compositions explore scientific study, isolation wards and a dragon spewing the virus. “I’ve made three paintings so far. One shows the virus [depicted as a dragon] originating from the wet markets of Wuhan and bypassing scientists to spread across the world,” he says. Another shows how sanitising and masks have become the new way of life. “I’ve also depicted churches, temples and mosques, to show that no matter the religion, all of us are united in this fight.” But the irony, says Vangad, is that “despite all our development, science still cannot find a solution. What everyone is telling us to adopt are things that we were already doing in earlier days — such as avoiding crowded places and eating healthy”. So what goes around comes around! From ₹22,000 onwards. 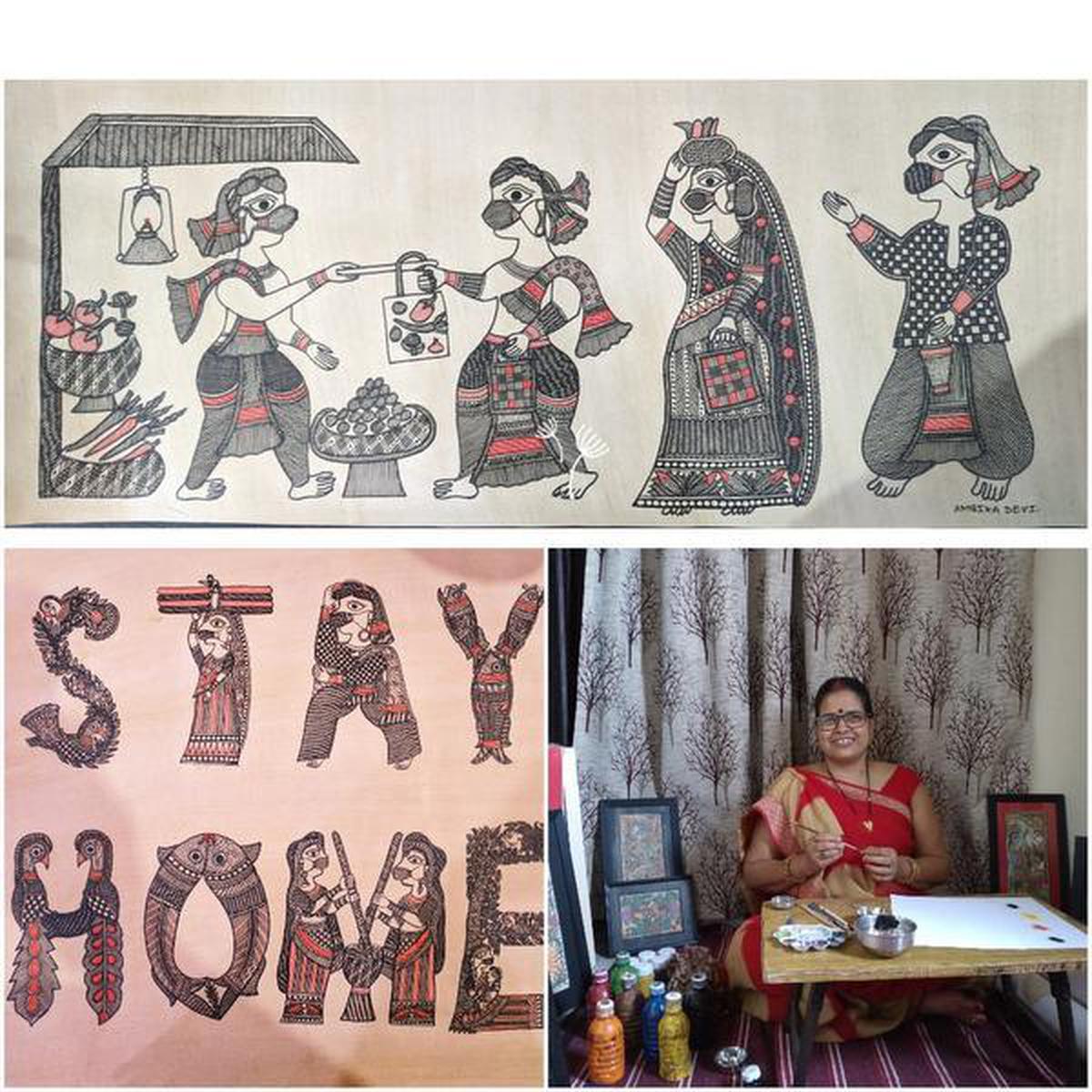 The National Award winner has travelled extensively, met the Prime Minister, and has never shied away from trying new things. One of her murals adorns the dining room wall of a top news honcho, and a few years ago she teamed up with designers to showcase madhubani at a Marie Claire-Dastkar fashion show. “But now, stuck at home, I’m constantly worried about how craft will fare in the coming days. So, instead, I decided to focus on what’s happening in the world,” says Devi, who is currently in Delhi. Her output: eight paintings, depicting everything from women-centric scenes of social distancing to washing hands. “My son showed me a ‘Stay home’ poster, and I recreated even that in my style,” she laughs. Dastkar’s founder Laila Tyabji is a fan. She posted on the NGO’s Facebook page: “I just love the [painting of a] woman sitting under a tree with her baby, masked. Don’t miss the monkey on the tree!” From ₹3,500 onwards. 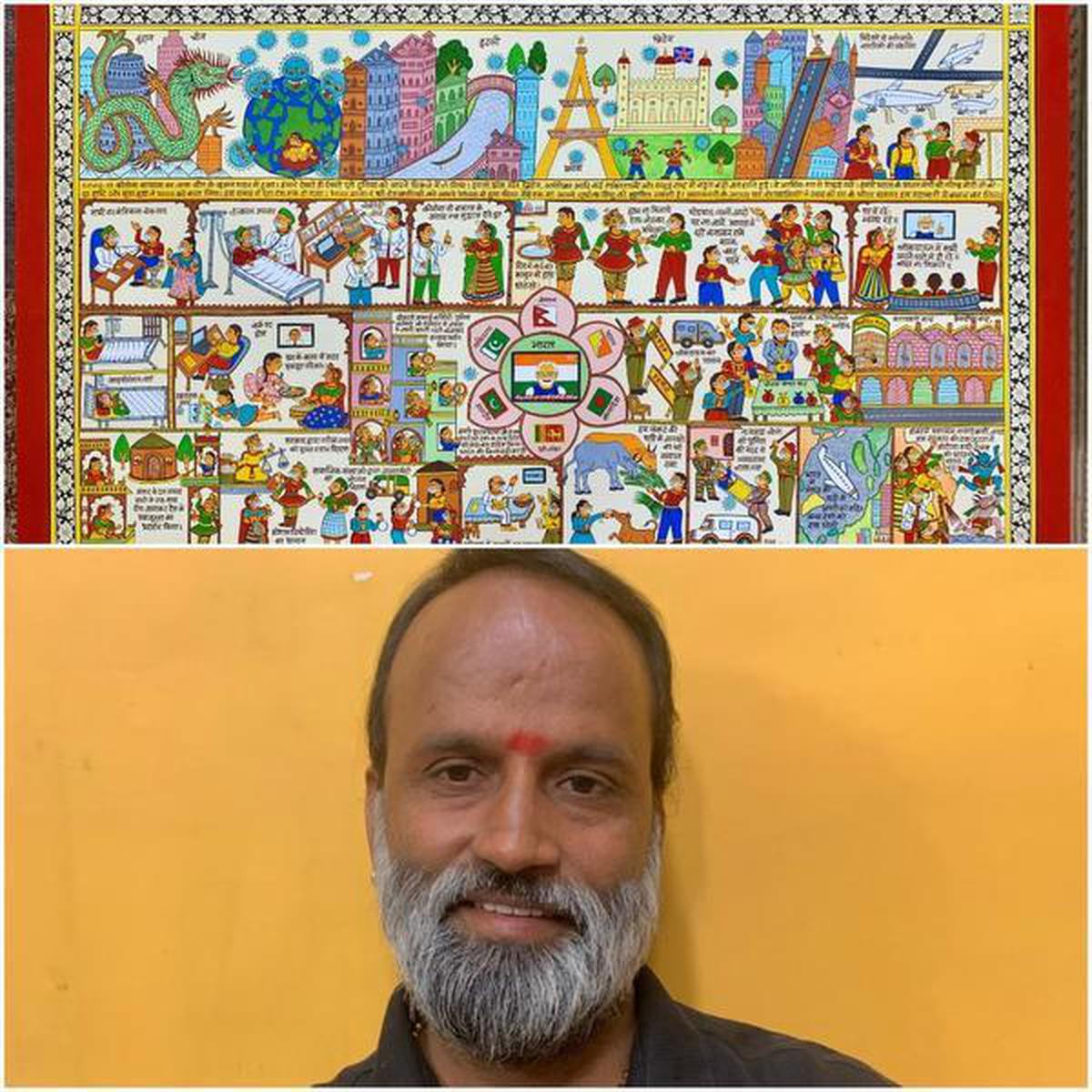 The artist’s politically-charged composition is far removed from traditional phad art. But he says, the storytelling style is ideal to show the cause and effect of Covid-19. “It took me a month to create this painting, which has 41 scenes — depicting a dragon from Wuhan spewing virus instead of fire, to people being scanned at airports and being sent into quarantine,” he says. But there’s hope too. “India is protected because Bharat Mata has enfolded us in her arms, and the virus will finally be driven out,” he adds, explaining that while he has depicted everyone uniting in the fight — from doctors and cops to the public — he has excluded politicians because “they play games”. Approximately ₹75,000. A mixed media artist, Gangal is passionate about kangra, the pictorial art from Himachal Pradesh. “I take the characteristics of the traditional and mix it with contemporary compositions,” she says, explaining that through this painting, she decided to replace feelings of despair with something inspiring. “I explored our mythology and chose Lord Krishna who battled demons. And instead of traditional ornaments, I gave him a mask, sanitiser and a disinfecting machine.” The painting is divided into two: on the left, Krishna battles the tentacled virus — which is sucking up humans — while on the right, a cityscape shows people indoors. “I’ve covered themes such as thali bhajao, humanitarian help [women distributing food to the poor] and how nature is thriving now that pollution has lessened with factories shutting down.” 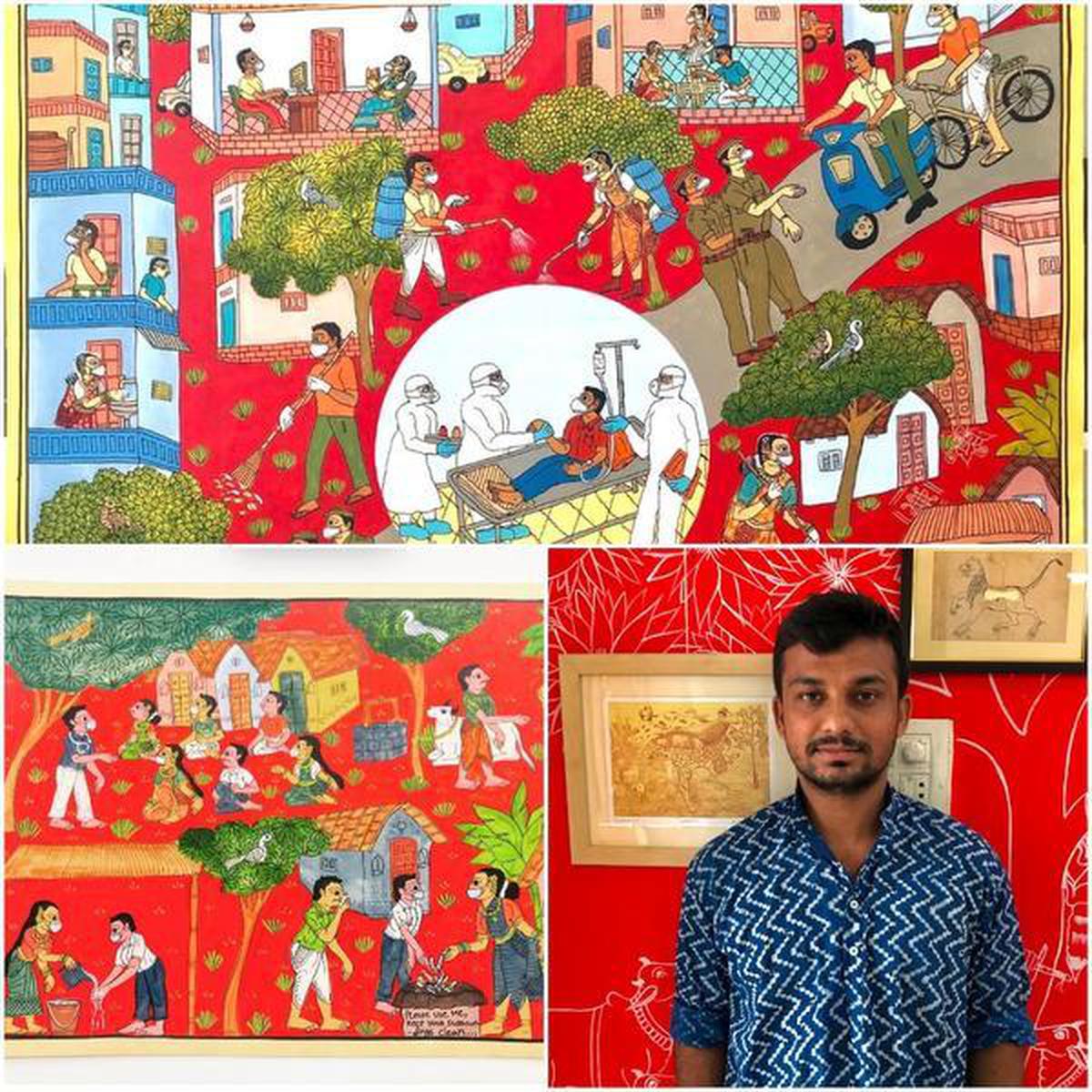 This is the first time that Kumar — who hails from a long line of Nakashi artists (they worked at the Nizams’ palaces, including the Falaknuma) — is tackling a contemporary subject. “When the lockdown was announced I had a lot of time on my hands, so I decided to tell the story of the current situation,” says the fine arts graduate. The biggest scroll depicts hospitals, social distancing in villages and cities, migrant workers walking home and, on a positive note, how the younger generation is learning games and wisdom from their grandparents. Priced at ₹27,000. 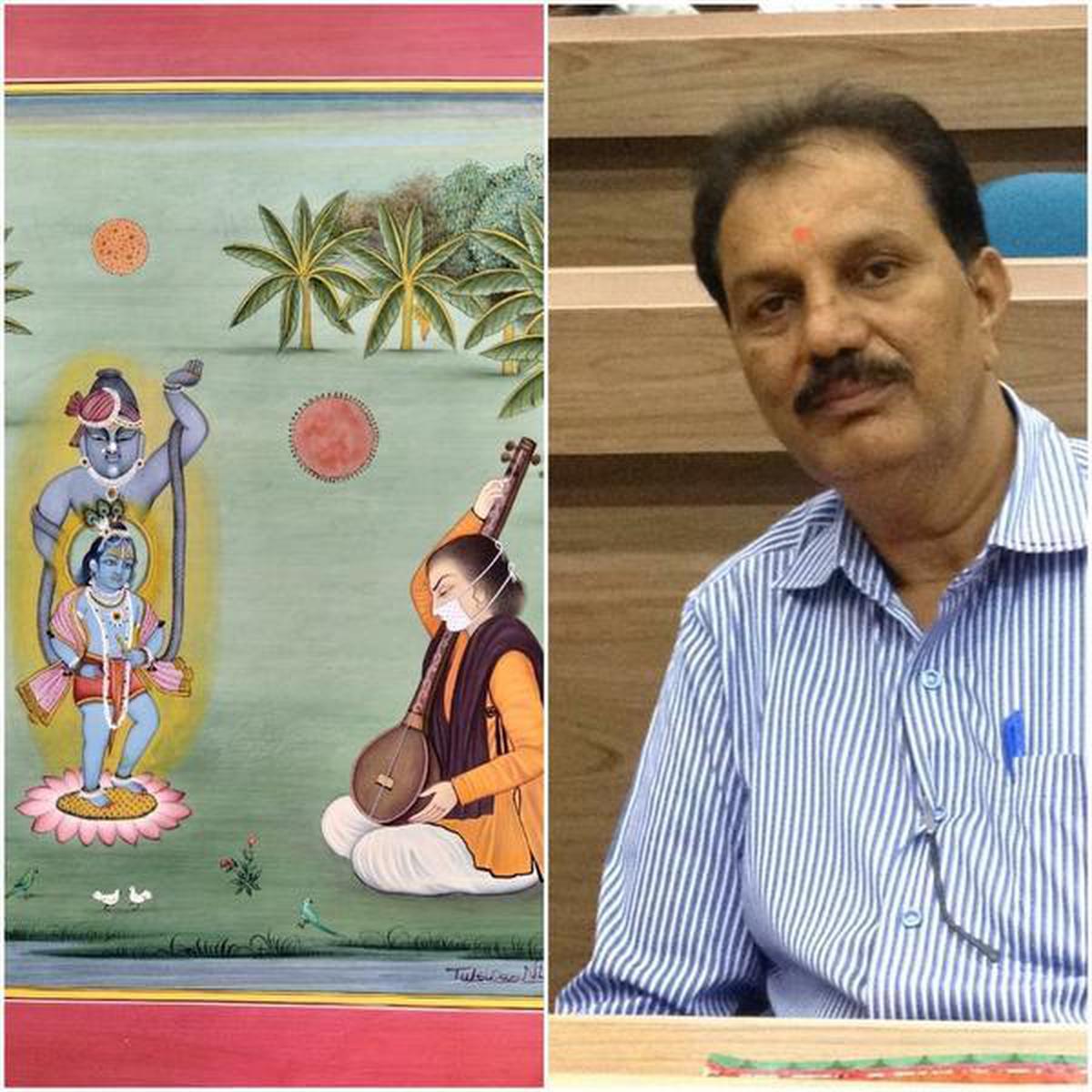 Unlike many of his peers, Nimbark has kept his work simple. “It is a time of confusion and stress, with the coronavirus spreading everywhere; there is no cure or a vaccine. This is when we need to turn to God,” says the National Award-winner. On his two canvases — depicting devotees wearing face masks praying to Lord Krishna — he introduces Covid-19 subtly. The first shows the virus floating in the air, while the second has a bottle of sanitiser placed strategically on the ground. “There are no fresh orders for paintings coming in, so I’m experimenting, trying something new. With works like this [he is also working on a series of paintings on the Sikhs’ 10 gurus], I hope I’ll be able to drum up some demand in the days to come.” Priced at ₹20,000. This folk art is not just about stories from mythology. “We depict current events and share major announcements,” says Chitrakar, who’s created scrolls featuring the 9/11 attacks, the 2002 tsunami, campaigns against female foeticide and water shortage. “This work is a public service announcement and a plea to the Almighty. I’ve asked people to trust in doctors, wear masks and maintain physical distance.” The work will be expanded into a book — exploring pandemics, what causes them, lessons learnt — with Chennai-based Tara Books. “The scroll has limitations: it has to be short, so I can show it and sing about it. But a book is a legacy project.” 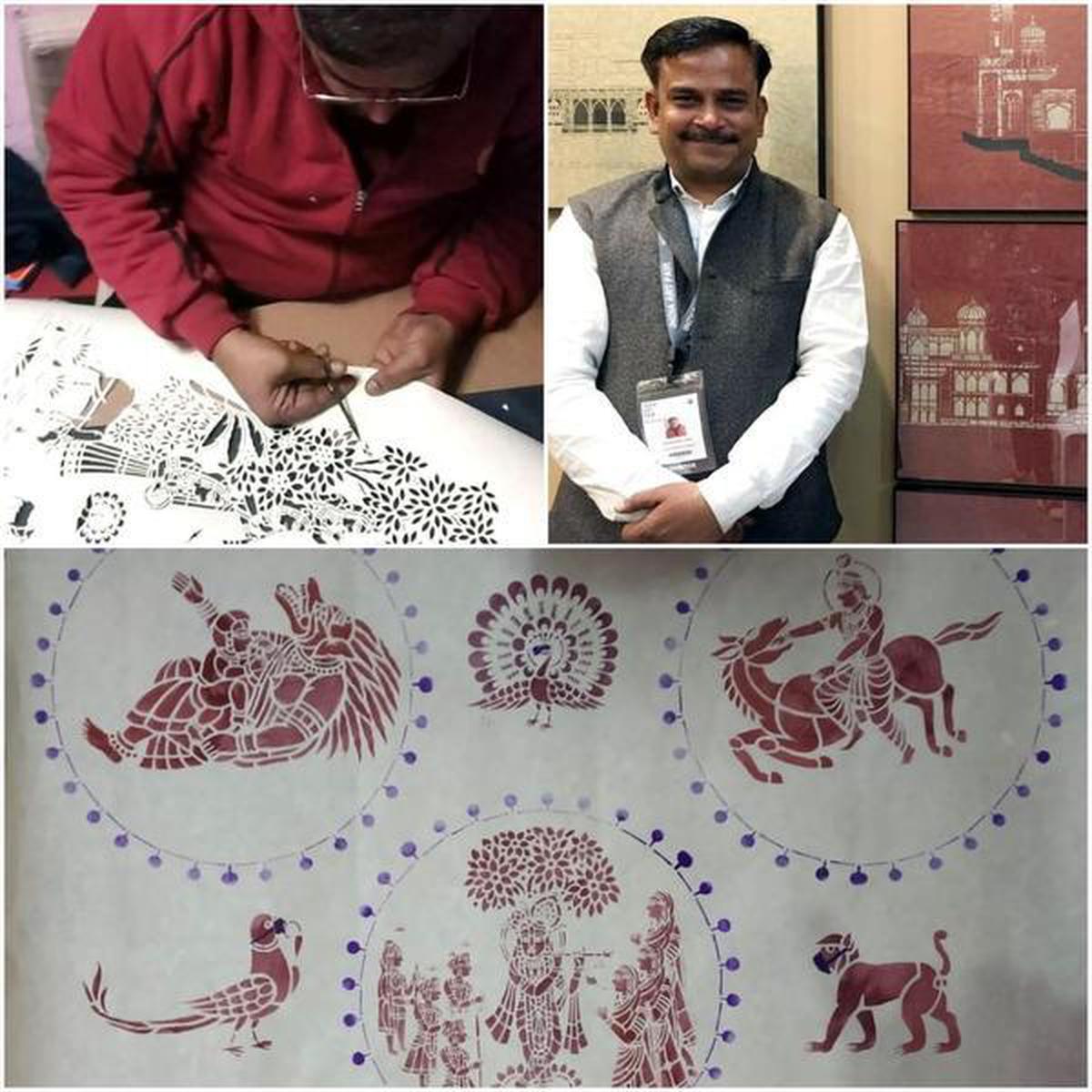 When in Mathura, can the focus be on anyone but Lord Krishna? “I thought back to how Kamsa sent a host of demons to kill Krishna when he was born. He defeated all of them. Just like that, he can defeat the virus too,” says Verma. Using sanjhi art — the intricate paper cutting and stencilling technique traditionally used to make ritualistic and ceremonial rangolis — the fourth generation artist has created a montage of five scenes. “The central image is of devotees praying to Krishna, encircled by four of the Lord’s battles with demons. And all this is being observed by a masked cow, parrot, peacock and money. It is also a plea to deliver us from masks,” he chuckles.

Previous articleService with a mask: Inside paid quarantine hotels in Visakhapatnam
Next articleKannada social-realist play with a Christian perspective