Home Top Stories Whose hand is this anyway?
Top Stories

Whose hand is this anyway? 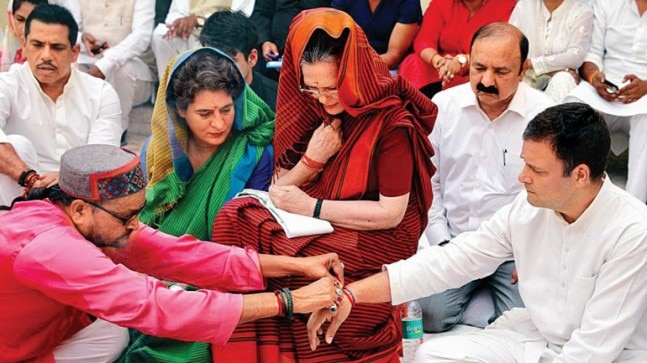 IF one were to define Rahul Gandhi by his current position in the Congress, it would have to be as another of the 52 Lok Sabha members of the party. He is not even a general secretary, though the former party president is part of the highest decision-making body, the Congress Working Committee (CWC). Yet, in the past two months, since the national lockdown was imposed to arrest the spread of the coronavirus, Rahul has more or less been the face and voice of the Congress. But then again, his mother Sonia Gandhi is the Congress president, the tallest leader in the party.

This unscripted division of power and responsibility between mother and son has kept everyone guessing about the leadership in the party. The lockdown has only added to the turmoil, as a game of one-upmanship is on between two groups, the Sonia loyalists and Rahul’s coterie. For instance, on March 26, a day after the lockdown came into effect, Sonia wrote a letter to Prime Minister Narendra Modi suggesting measures “to address the massive health crisis” and “ameliorate the immense economic and existential pain” that vulnerable sections of our society would be subjected to. Three days later, Rahul also shot off a letter to the prime minister along the same lines.

Since the lockdown began, both mother and son have been quite frequent in their public appearances and comments. Though mostly on virtual mode, this is unprecedented for both of them. Sonia has released three videos, held two CWC meetings, a meeting with like-minded parties, a video conference with state Congress chiefs and written six letters to the prime minister. Rahul has released five videos, held three press conferences (his first since he resigned as party president in July 2019) and written three letters. The third member of the troika, Priyanka Gandhi-Vadra, has also been active, from taking on Uttar Pradesh chief minister Yogi Adityanath on the migrants’ issue to releasing video appeals. But she has restricted herself to Uttar Pradesh, the state she is in charge of.

One cumulative effect of the Gan­dhis’ visibility is that it has consolidated the Congress’s status as the prime opposition party, a position that was under threat because of its dismal performances in elections in recent times. But this has also raised the oft-repeated question: who is actually in charge of the party? The question was thought settled in December 2017 when Sonia, after helming the party for two decades, made way for Rahul as Congress president. But following a disastrous loss in the 2019 Lok Sabha election, where for the second time in a row the party was reduced to double digits in the 543-member house, Rahul resigned from the post. For three months, the party could not find a successor till finally Sonia stepped back in. The development once again exposed the leadership vacuum beyond the Gandhis.

The return of Sonia also bro­ught back the party veterans who had partially lost their voice in Rahul’s tenure. They had successfully thwarted the attempt at inner party democracy where some enthusiastic Congress leaders had called for an election to the post of party president after Rahul’s departure. That he had categorically ruled out a return further strengthened the position of the old guard while his purported camp followers felt that they had been left in the lurch.

Soon, it became evident that the central command was slipping as the party started speaking in contradictory voices on contentious issues such as the abrogation of Article 370. At other times, like during the public protests against the Citizenship Amendment Act (CAA), 2019, across the country, the party’s top leaders were missing from the streets. A meeting convened to mobilise support from like-minded opposition parties only exposed the chinks in Opposition unity. Amid all these, Rahul’s indifference to party affairs caused restlessness among those who were not in the veterans’ corner.

The status quo remained till Team Rahul smelt an opportunity for a comeback during the COVID-19 pandemic. What also fuelled a sense of desperation was the exit of Jyotiraditya Scindia, one of Rahul’s closest lieutenants, and the subsequent fall of the Congress-led government in Madhya Pradesh just before the country was shut down on March 25. “The old guard was not going to cede any space as we saw in the case of MP. They are ready to lose a government rather than accommodate a younger leader in the power structure. Several other young leaders were ready to depart. It was important to send out a message that Rahul Gandhi is not out of the game,” says one of his close aides.

So, after a relative period of inac­tivity (he was mostly missing during the anti-CAA protests and Delhi riots), Rahul started targeting the Modi government in February on its COVID-19 battle preparedness. Having learnt his lesson in the last general election, when his personal campaign against Modi backfired, he was careful not to attack the prime minister directly. “We are not here to criticise. We want to play the part of a constructive opposition,” he kept reiterating at press conferences.

Instead, there was a subtle attempt to project himself as someone who Modi is not, a compassionate listener who is ready to learn. So, there were videos which showed him seeking advice from experts such as Raghuram Rajan and Abhijit Banerjee, or talking to poor migrants on the road. In fact, the migrants’ crisis has provided the party with the most ammunition against the Modi government. Rahul not only championed their cause but also made the party create such a ruckus that it forced PM Modi to finally acknowledge the crisis in his Mann ki Baat radio address on May 31.

While this has made Rahul more visible, his critics (inside and outside the party) still doubt his potential to lead the party to election wins. “His press conferences are doing him more harm than good. They are only providing meme material to the BJP,” says a Congress Rajya Sabha member.

Rahul’s team members are not worried, as they claim it’s a long-term strategy. Indeed, they say that since he is not helming the party anymore, it frees him from the responsibility of winning elections to focus on building a narrative against the “BJP’s politics of hate and economics of stupidity”. “Our goal is not to defeat Modi. His follies and arrogance will bring him down. Our job is to explain to India why Rahul Gandhi’s brand of politics is the best alternative India has. It may take time, but we are confident,” says one of his close aides.

Others point out that the relentless focus of Rahul and Priyanka on migrant workers makes electoral sense as nearly 80 per cent of them belong to Uttar Pradesh and Bihar, two states which account for 120 seats or 22 per cent of the total Lok Sabha tally. For now, the two have been successful in grabbing eyeballs, but converting the attention to votes remains a long-term challenge which involves building party infrastructure from the grassroots. And both of them have shown no appetite for this. Besides, the party is caught in a vicious cycle. Building an organisational network needs funds and the long absence from power in many states has dried up all sources of funds. Also, the party hardly invested in grooming state leaders, so the organisational structure is in shambles in many states. “Yes, it will take time but one issue that resonates with the masses will make up for the organisational deficiencies,” says a Rahul aide. But the question is: will the veterans allow this long-haul game, or cede political space to Team Rahul? The signals suggest it is unlikely. On April 8, K. Raju, the ex-bureaucrat who mans Rahul’s office, and technocrat Sam Pitroda, his one-time mentor, held a video conference with health ministers of Congress-ruled states to guide them on managing the COVID-19 pandemic. Two days later, in an apparent attempt to signal who the boss is, the veterans organised a video conference between Sonia and all state Congress chiefs.

On April 18, the party constituted an 11-member consultative group, including Rahul, to “deliberate on matters of current concern and formulate the views of the party on various issues”. No veteran found place in the group and most were Rahul loyalists. Five days later, Sonia convened a CWC meeting to discuss the pandemic, as advised by the veterans. This was the second CWC meeting in a month, unprecedented in recent times.

The veterans again stole the limelight on May 4, when Sonia Gandhi said that the Congress would bear the railway fares of home-bound migrant workers. The Centre had been facing widespread criticism for making stranded migrants pay for their travel. Following her offer, the Modi government clarified that the railways would pay 85 per cent of the fare, and the rest would come from the state governments. “The announcement once again showed that Sonia was the boss. Leaders offer solutions, they don’t seek solutions from others,” says a CWC member, taking a dig at Rahul’s interactions with global experts. Family loyalists, however, say these divisions are only in the minds of the followers of both camps. It has always been clear that Rahul, at a “politically favourable” time, will inherit the party while Priyanka will focus her energies on UP, the state which is most crucial for a Congress revival at the national level. The time is certainly not favourable, perhaps why Rahul has shown no interest in taking charge. Till then, the existing command structure of confusion and conflict will continue. “The lack of clarity weakens any challenge to the Gandhis and keeps them relevant and indispensable to the Congress. Let’s not forget that none of the three are grassroots mass leaders who inspire a devoted cadre. They thrive in this confusion,” says a Sonia loyalist.

Editor’s note: In response to this article, former Congress Lok Sabha MP from Alwar, Jitendra Singh said, “I am disappointed with the article “Whose Hand Is It Anyway” in the June 15, 2020 issue of INDIA TODAY. It mentions me as a “disgruntled” Congressman. It’s an incorrect attribution. I take umbrage at my name having been mentioned in this baseless and defamatory fashion. I am a most contented Congressman of long-standing service to the All India Congress Committee.”