Why this lady chose to be an auto driver 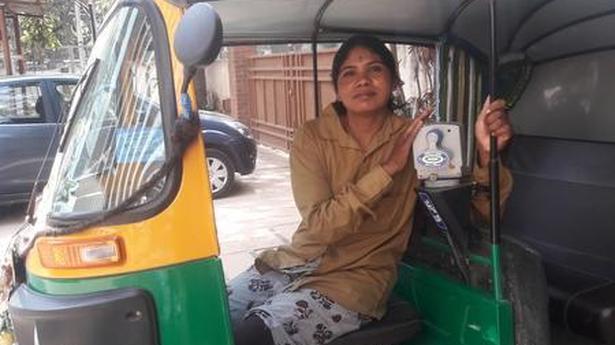 It was one of those typical mornings on Sarjapur Road when my usual travel app couldn’t land me a cab or an auto and I was left with no choice but to try my luck at the auto stand.

True to form, the usual suspects simply refused to entertain a ride into the city. I just kept trudging along the line, asking, “Anna, Infantry Road barthira? (Will you come to Infantry Road),” and honestly not expecting an answer in my favour.

I had almost reached the end of the line, but kept with the question, looking up only when I realised the ‘Anna’ in question had toe rings and nail polish on her feet.

She said she’d take me and I gratefully hopped in. Apart from her kajal-lined eyes, I couldn’t see much of her face, swathed as it was in hijab-fashion against the dust. Or so I thought.

During that one-and-half-hour drive I realised her face gear didn’t have much to do with the pollution. People would just turn and stare unabashedly. Pillion riders would nudge the biker to take a look, occupants in cars would crane their necks for a better glimpse, truckers would do a double take and her fellow auto drivers were no exception either. Through it all, she looked straight ahead.

My initial amusement gave way to curiosity about her unusual career choice and I struck up a conversation with her.

Hailing from Mysore, Ganga, 35, has been an auto driver for almost two years now. She is a single-mother and her 11-year-old son suffers from a heart condition. “In the beginning, I took up small jobs in offices, even working as a housemaid and cook at different times. But every time my son had to be hospitalised, it became difficult to keep asking for leave.”

“People were sympathetic, but lost patience when I had to take leave suddenly. That is when I realised if I was an auto driver, I could be my own boss with my own schedule. Now, I don’t cut a sorry figure with co-workers,” she says.

Truth be told, her family initially had saved up to buy an auto for her younger brother, but seeing her interest and efficiency, (she learnt to drive it in two days!) they handed it to her.

Despite making heads turn on the roads, Ganga says it was pretty smooth sailing at the RTO, where all her paperwork was processed without a hitch. “Out on the road, I see all kinds of co-workers — those who graciously give me way and others who tell me to go back to the kitchen. That is one of the reasons I cover my face completely,” she says.

Ganga hits the road at 9 every morning after dropping her son off at school, taking a two-hour break when he returns, before winding up at 9 every night. With the current lockdown in place, she is confined to her home with her son, who “thankfully, hasn’t had to go to the hospital for a while now.”