Home ENTERTAINMENT Reviews 'Widow of Silence' movie review: A quiet but telling portrait of a...
ENTERTAINMENTReviews

‘Widow of Silence’ movie review: A quiet but telling portrait of a half-widow 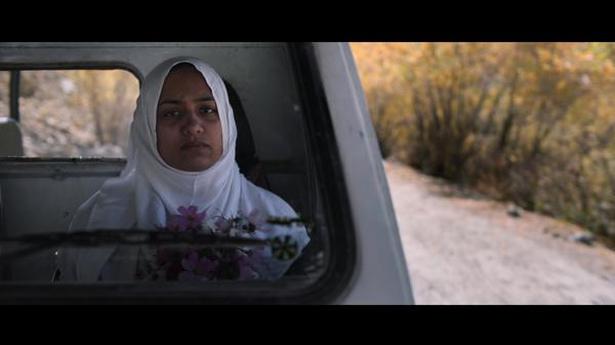 In the last one year, Kashmir has witnessed the world’s longest-ever Internet blackout ever imposed by a democracy. The life in the Valley has been shrouded in enigma, with reports emerging of human rights violations, chronicled in the rather rare news articles, photographs or documentaries. Although Praveen Morchhale’s Widow of Silence, was filmed and screened at international film festivals like Busan and Rotterdam, much before the abrogation of Article 370, it puts a pertinent face to what ordinary lives in the Valley would look like today, caught in the crossfire of perpetual State and military surveillance, bureaucracy and resistance movements, and has been for decades. There is, therefore, an inherent appeal to the film, which arises of sheer curiosity of the subject, the desire to witness and connect beyond headlines and editorials.

In Morchhale’s film, Kashmir is often referred to as jannat (paradise), most often by a taxi driver, who ferries locals from their village to the town centre of Pulwama. The film, rife with long-shots and sweeping landscape images, captures Kashmiris against the vast, dry and imposing terrain they inhabit, slowly demonstrating how their lives are anything but paradisiacal. The narrative contrasts the visual beauty of the Valley with the conflicts, evoking a feeling of discomfort in ‘normalcy’. For the most part, Morchhale abstains from theatrics and drama, and maintains a restrained tone of ‘ordinary lives’, while unambiguously establishing the conflict of Aasiya (Shilpi Marwaha), a half-widow.

We, as the audience, are well-aware of Aasiya’s story during the course of the film — that the Indian military picked him up in 2010 for interrogation and he never returned. Commonly known as a ‘half-widow’, Aasiya is one of the many women in the Valley, who is awaiting the formal recognition from the Indian government that her spouse is dead, so she can move on, emotionally and financially. Aasiya is seeking neither compensation nor revenge, but the rightful inheritance of her husband. Aasiya is left with an ageing and non-responsive mother-in-law and a teenage daughter, Inaya, who questions the veracity of her father’s abduction and his character. Despite this painful background, the film is most impactful when demonstrating the mundane activities of its protagonists and the people of the Valley, where death and uncertainty are constant companions. The film is contained to daylight, where the flood of sunlight and brightness works as a fascinating antithesis to the darkness of Aasiya’s life, amplifying her woes even more.

It’s the sporadic attempt at drama that appears staged and inorganic, like Inaya’s classmates hurling paper balls at her and mocking her for a missing father. The dialogues in these parts are clunky and performative. While Marwaha is restrained and in full control of her character, the other actors — like the one playing her colleague at the nursing home where she works in or the lecherous registrar — deliver lines in a stunted and memorised fashion. Although, it must be noted that they are non-professional local actors. The everyday details like cut-off phone lines, news of Uri attacks on the radio and constant checking of identity cards (“They value our papers more than us,” says the taxi driver), add more drama than the attempt. Although not urgent in its telling, Widow of Silence has a quiet perspective, a deeply political one. The sympathies clearly lie with the Kashmiri locals but the idea of the ‘other’ is occupied by the military, bureaucracy and militants, maintaining a fragile balance. There is no talk of nationalism or historic wrong, but much-needed documentation of common lives, deep in the Valley, where men are taken away from homes, never to return.

Widow of Silence will stream on Mubi India from June 14