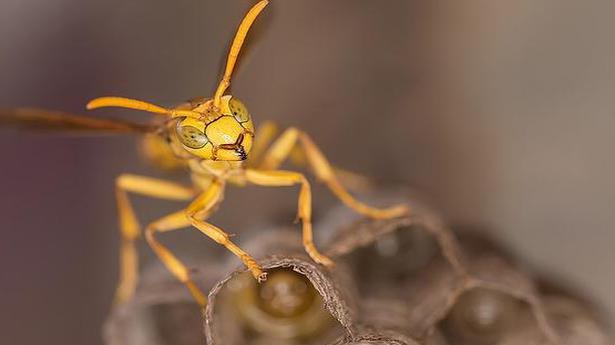 Yellow Paper Wasps, commonly known as Tattaiyas in Hindi, are one of those few creatures for whom I have always had mixed feelings. This confusion mostly stems from the fact that though as an adult and naturalist, I understand their important role in the urban eco-system, as a child I have been bitten numerous times.

Then in the last few weeks, I had the pleasure of observing a butterfly’s life cycle on my balcony. My kadipatta plant played host to eight healthy Common Mormon butterfly caterpillars and I was eagerly awaiting the next stage – of pupation.

As a child I always thought that bees and wasps were identical, and it was only much later that I realised that not only were they vastly different, but also more than one kind of these skilled predators existed around us. However, the Yellow Paper Wasp is the most common type of wasp seen in and around the city.

Like any other insect, the Yellow Paper Wasp has three segmented body parts: head, thorax and abdomen with six legs. They get their names from the papery-nests (grey or brown) they build for themselves.

This wasp belongs to the genus Polistes, which is perhaps the largest genus within the family Vespidae. The wasps usually collect fibres from plants and wood and mix them with their saliva to create these water resistant nests, often preferring building their nests in and around human habitation.

The life cycle is perhaps the most interesting and complicated aspect of these creatures. The pre-emergence stage begins during spring (March end) with a solitary female wasp, known as the foundress. She initiates the construction of the nest alone or sometimes with a small group of related female wasps. They build one cell and continue to add more in a hexagonal pattern. Once the initial phase of nest building is complete, the foundress lays eggs, which will hatch into female larvae called workers. The foundress wasps are the only fertile wasps and can control the sex of the offspring.

When the larvae hatch, the foundress indulges in what is called progressive provisioning, where it constantly brings food (caterpillars and other larvae) to the larvae during its development. After pupation and emergence, the first set of females serve as workers who assist in expanding and taking care of the nest, and also feeding the brood. However, in summer, the dominant foundress often drives these worker females away. These then try and make their own nests or take over another nest. The worker females are all sterile.

After this, the reproductive phase begins when the foundress lays eggs from which other fertile wasps emerge. These are destined to become foundresses. The foundresses have increased levels of fat in their bodies, unlike the female worker class.

Once the foundress’ larvae emerges, the eggs of the male larvae are laid. In these kinds of insects with the female usually dominating nests, the male’s role is restricted to mating. The mating process takes place right before winter. The inseminated females then gather in small groups and take refuge in a hibernaculum, a place where they retire to (hibernate) for the winter before coming out again in spring. These can be small crevices in houses, in pipes, trees.

Though we live in constant fear of their sting, they do play an important role as natural pest ridders. They often feed on pests and thus help in maintaining the well-being of a garden. Apart from feeding on butterfly caterpillars, beetle larvae and other insects, they may also feed on nectar and are thus pollinators as well.

The writer is the founder of NINOX – Owl About Nature, a nature-awareness initiative. He is the Delhi-NCR reviewer for Ebird, a Cornell University initiative, monitoring rare sightings of birds. He formerly led a programme of WWF India.